Protein is a macro-nutrient that is essential to building muscle. In fact, it is essential for life as it is found throughout the body—in muscle, bone, skin, hair, and virtually every other body part or tissue. Protein is made from twenty-plus basic building blocks called amino acids, nine of which you must get from food.

Protein can come from a relatively large variety of sources. The most obvious source of protein is from the consumption of whole foods, largely from animals. You can get protein from non-animal sources such as nuts, legumes, peas, and other vegetable products. Some of the many foods that are relatively high in protein include: chicken, yogurt, quinoa, steak, fish, beans, and – one my favorites – eggs.

Here’s a cool picture that shows protein percentages for some common foods. As you can see, sugar is pure carbohydrate whereas a food like shrimp is almost all protein. The healthiest way to get your protein is from wholly unprocessed food. So, yes, you should skip the doughnuts. Unprocessed food allows for the easy consumption of high levels of vitamins and minerals while giving variety to those same nutrients.

Since eating whole foods is not always possible there are, of course, (approximately) a million and one protein powders on the market. They can be derived for a multitude of different sources, including dairy, eggs, animal, rice, hemp, peas, and other vegetables. They boast a huge variety of flavors (although vanilla and chocolate are most common), can be sweetened to unsweetened, can be in different forms such as isolates or hydrolysates, and more. The list goes on and on. There’s a protein powder for virtually every type of person or athlete. The way these powders work is in bulk – you purchase a big tub of powder and mix it in with water, milk, shakes, smoothies, or batters. And, voila, you have an instant protein source.

Because you are buying in bulk amounts, protein powders generally get you more bang for your buck. But they can often be chalky and disgusting.  Which is why there is another option if you’re looking to add protein to your diet. Namely, premade and bottled protein shakes (sometimes called RTD or Ready-To-Drink), often made by the same companies who sell tubs of powder.

These shakes are almost always more expensive than powders, but that is for good reason – they are simply easier to use, and you pay a bit extra for that convenience.

With a shake instead of a powder, gone is the time it takes to make your shake, gone are the clumps of powder that catch in your throat, and gone is the effort involved in pulling the scoop from the bottom of the container.

You also no longer have to worry about those little, though no less annoying, protein powder spills that can be really frustrating to have to clean up. Like I mentioned earlier,  pre-made shakes are just easier and more convenient which leads me to this Premier Protein drink review. 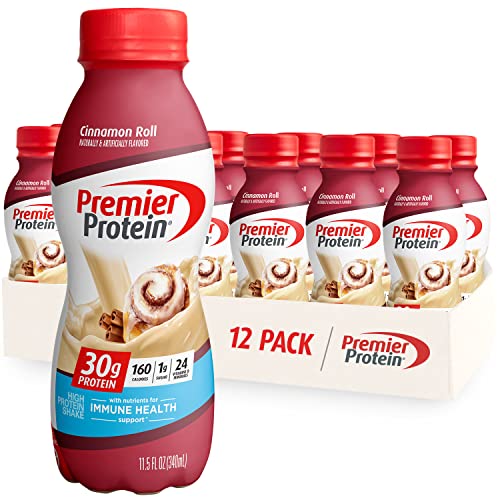 This is the cheapest place to get them: Out of all the brands and options for pre-made shakes that exist, and there are definitely more than a few, one of the best overall protein shakes is the Premier Protein shake. In fact, this high protein shake is a great option for both during and post workouts.

Reasonably-priced, each 11.5-ounce bottle contains only 160 calories while boasting a full 30 grams of protein. This puts Premier protein on the higher side in comparison to most bottled protein shakes which contain closer to 20 grams of protein. If you are a serious athlete, this gives Premier a big step up, as each shake will inundate your body with fifty percent more protein than most brands.

If you are lactose intolerant, please be aware that there is some lactose.  However, multiple folks have reported no side effects when drinking the shake.

Each bottle contains 3 grams of dietary fiber. The fiber is important in slowing the digestive rate of the protein, allowing it to release amino acids into your bloodstream for a longer period of time.

Premier also boasts 0 grams of added sugars, and only 1 gram of total sugar making it Keto diet friendly.  However, Sucralose – an artificial sweetener – is included in the ingredients list. It’s something to keep in mind if you’re intent on finding a protein shake that is devoid of any type of artificial sweetener.

In addition to being soy and gluten free (!), each bottle contains a decent concentration of a total of 24 vitamins and minerals, an added health boost.

The high nutritional levels also make this shake an option for meal replacement, though eating at least three meals a day of whole foods is definitely the better choice. You can also use them in other ways besides a drink to sneak in some additional protein: in a smoothie, in your morning coffee, in your morning pancake mix, and virtually anywhere you’d use a milk substitute. Premier protein comes in 10 different flavors, including staples like vanilla, chocolate, and strawberry and more rare varieties such as caramel, cookies ‘n cream, pumpkin spice, and cinnamon roll. This shake has won the gold medal for the American Master of Taste ready-to-go protein drinks for the past five consecutive years. Which brings me to my next point.

In a world of awful-tasting protein shakes, Premier Protein shakes are one of the best tasting protein drinks available. My personal favorite is the chocolate flavor.  Although some do find it a bit chalky, it’s similar to drinking a slightly richer, more thick version of chocolate milk. Cafe Latte and banana are also quite good in my opinion. Since taste is highly personal, you might want to try a few different ones.

Obviously, Premier Protein shakes are ideal for athletes who perform highly intense workouts at a very regular rate as one shake contains 60 percent of your recommended daily protein intake. However, there’s no rule against just drinking or using part of bottle each day. So, if you’re just looking to add some extra protein to your daily nutrition,  it would also work very well.

Like I mentioned, one drawback for some is the inclusion of the sweetener Sucralose, also known as Splenda. While research has generally shown that Sucralose is safe in moderation but it may not the best thing to be putting into your body in large doses over a long period of time.

Now if you are really set on a shake and want a few different choices, here are some other great options that I recommend. This is the cheapest place to get it from.

Orgain’s clean protein shakes are a great option. Using natural stevia as a sweetener, they are also gluten and soy free, use non GMO ingredients and are certified Kosher. Twenty grams of milk protein (again, whey and casein), 130 calories, and 4 grams of sugar make these a great option for those on a low-carb diet or lifestyle.

Orgain makes dependable, delicious, and healthy protein options that should definitely be considered. This no-hormone, no-antibiotic, grass-fed dairy is a generally reasonably priced with (in my opinion) a very good a taste. They’re great as you’re putting healthier, more natural substances into your body. These protein shakes are highly recommended if you are concerned about “clean” eating. This is the cheapest place to buy 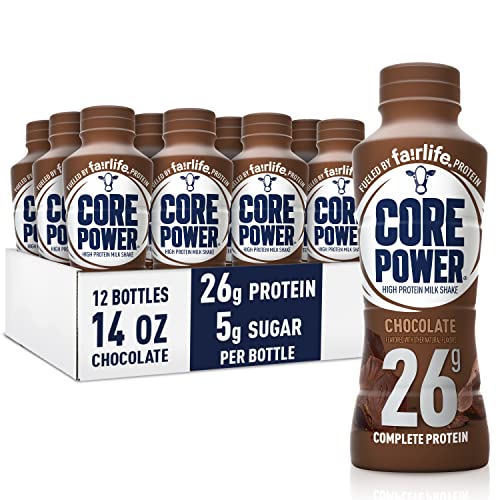 Another option that’s a little more similar to Premier is the Core Power high protein shake. It contains 170 calories of which 26 grams are protein and 6 grams are carbohydrates per each 14 fl oz bottle.

At around the same price as these other options, Core is lactose and gluten free and contains no added sugars (although the vanilla flavor contains an artificial sweetener; chocolate does not). It is one of the better-tasting shakes out there. It also works great as a meal replacement especially if you are closely watching your carb intake.

Note: Core has another protein shake option that is 11.5 fl oz, has 26 grams of protein, and 26 grams of sugar. Sweetened naturally with cane sugar and honey, this a fantastic option for those wanting only natural ingredients.

Seriously, it is a great option assuming you don’t mind the higher carbohydrate content. It does make a great post workout protein shake too as your body is more receptive to carbohydrates after a hard workout.

Overall  Premier Protein is still my top recommended option for most people, especially if you’re looking for an affordable high protein shake that can also serve as a meal replacement.  For those looking for something more natural with great taste, you can’t go wrong with Core Power’s natural RTD (ready to drink). Because all of these products are highly dependent on personal preference, these may not the best shake for you. Give them a try but be aware there are always other options – you just have to know to look.