Launched in 2017 by superstore GNC, Beyond Raw is a brand that contains different type of supplements such as protein powders, mass gainers, and pre workout powders. Evidently doing well with over 40 different products 1or variations of products, the line has slowly grown over time.

One of the most popular – and pretty well-reviewed – products is the Beyond Raw LIT Pre-Workout powder. While I’ve typically avoided a lot of pre workout powders, I have been using them a bit more albeit still infrequently. And fresh off my review of ON’s Amino Energy, I decided to bite the bullet and give LIT a try.

Coming in a multitude of “interesting” flavors such as Jolly Rancher blue raspberry and icy fireworks, I grabbed the “gummy worm” flavor. At about $43 for 60 servings, I figured it was worth a shot. Read on if you want to find out my thoughts about LIT’s mixability, taste, effectiveness, and value. 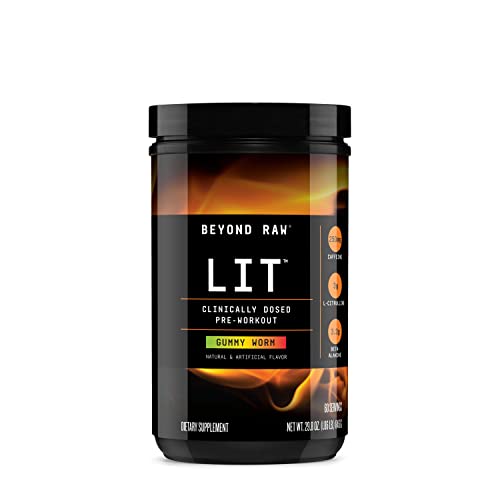 Or, if you just want to see my final rating, click here!

As a general rule, I don’t really care about how a supplement looks. However, I do care about easily finding usual information such as the ingredients, dosage, number of servings, and flavoring. In this regard, I find Beyond Raw pretty good as that info is found on the package.

More importantly, though, there’s too much small text and the coloring could be better too. While it does the job, I would prefer a simpler, less cluttered package with larger, easier-to-read fonts.

I’m going to post my standard disclaimer when it comes to pre-workouts. Namely, my recommendation is to use pre-workouts no more than once or twice a week at most. For one, you should be able to have a good workout without a pre-workout. If you have to rely on an outside source for your motivation or energy, you’re not in the right mindset for sustainable progress.

Secondly, the more you use workout boosters the more your body gets used to ingredients and the less effective they are. In turn, you have to up the dosage to get the same effect.

With that said, the dosing instructions on this are pretty vague: “mix one scoop in 8 fl. oz of cold water and consume pre-workout.” While it shouldn’t be difficult to drink a pre-workout, some additional information would be nice.

Is that one level scoop? One rounded scoop? Ideally, how long before my workout should I consume it? What if I want an extra burst – is it okay to take 1.5 or 2 scoops? Should I change the dose based on how much I weigh?

While common sense goes a long way here, there’s definitely some room for improvement in the “how to use” instructions.

Overall, I think the ingredients are pretty disappointing. Mainly because it seems to be loaded with a lot of unnecessary junk. Now, you shouldn’t be consuming a pre-workout for your general health so this isn’t a big surprise but…

Polysorbate 80? Soy Oil? Acesulfame Potassium? Acetylated Monoglycerides? 2that just rolls off the tongue, doesn’t it?. To be fair, those ingredients are considered “safe” but…not something I want to ingest regularly.

For example, Acesulfame Potassium (aka Ace K) is considered safe by the FDA but there’s still some controversy (and evidence of risk) and I would prefer to avoid or strictly limit it. The same can be said for multiple other ingredients in Beyond Raw Lit.

The caffeine serving – 250mg – isn’t anything crazy and is roughly equivalent to 2.5 cups of coffee. And while it does have some good parts – 0 g of sugar and only 15 calories – I find the “Pump & N.O. Support” underpowered. Same for the creatine — only 1.5g per serving? Many studies recommend 3-5g a day or 0.1 g/kg of body mass/day after an initial loading phase. I don’t see how 1.5g is going to do much of anything other than increase the marketing aspects.

Now, you may say I’m biased against the product and there’s no way I would say it worked since I just disparaged a lot of the ingredients. However, I want it known that I only evaluated the ingredients after I used the product. So does it work? Well, keep reading…

While taste is highly subjective, I have to say I didn’t really like the gummy worm flavor. It’s not horrible but it certainly isn’t something that tastes amazing either. I’d say it’s “meh.”

In addition to the almost neon green color – which is a bit off-putting – the flavor itself only slightly tastes like a gummy worm. It does have a slightly tart twist to it but it leaves a really artificial aftertaste in my mouth. Other flavors might be better but not really impressed.

On the plus side, it mixes really well. The powder is a small crystalline structure and didn’t take much stirring to have it fully dissolve. In fact, it mixes a lot easier than more powders I’ve used.

Although I’m cutting back, I’m still a pretty big coffee drinker. Which means I’m fairly desensitized to caffeine  which almost all pre-workouts use. Even with that considering Lit has 250mg of caffeine in a serving – along with the other ingredients – I still expected a pretty good rush like I experienced with ON’s Amino Energy.

As such, I went ahead and started sipping the LIT about 15 minutes before my workout. About 10 minutes in, I did feel a little surge of energy although nothing crazy. As I kept drinking the mixture during my workout, I kept waiting for more: more energy, more focus, more urgency.

And, to be completely honest, I never got that “more” from Beyond Raw Lit. While I did feel something, it certainly wasn’t on the same level as other pre-workouts I’ve tried.

And while I didn’t crash, I do feel like the something didn’t last very long. Maybe I had too high of expectations but ultimately I’m pretty disappointed with Lit’s effectiveness.

Considering the good reviews online, I have to say I’m pretty disappointed in Beyond Raw LIT. For one, the taste wasn’t very good and left an odd (bad) aftertaste. Secondly, the ingredients aren’t the best (who adds soy anymore?) and while that’s expected – to a degree – in a pre-workout booster, it’s still a bit off-putting.

Lastly – and most importantly – it just didn’t work that well for me. I found much better results with Optimum Nutrition’s Amino Energy; not only was it cheaper but it worked better.

As always, you may experience something different but this will not be my “go-to” energy booster. Beyond Raw LIT ultimately left me wanting more: more energy, more focus, and more urgency. Coupled with the fact the flavoring and ingredients aren't the best for me, Lit won't be my "go-to" for pre-workouts. It is well-reviewed online so if you want to give it a try, buy a small bottle and give it whirl. Maybe you'll like it better than I did.
Buy Now
Tags: Beyond Raw pre workout supplement